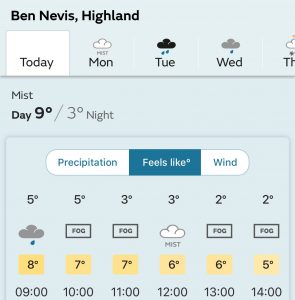 We had no choice, today was the day for Ben and so we just had to get on with it. We ate our breakfast whilst being observed by Stan the Stag (see yesterday’s blog post) and then set off, fully kitted up, to the Ben Nevis Visitor Centre, approx 1 mile up the road. 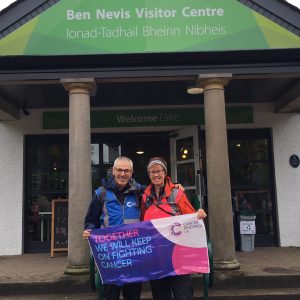 We had the obligatory ‘before’ photo taken and then began our trail to the summit of the highest mountain in the UK (1345m, 4,413 ft). 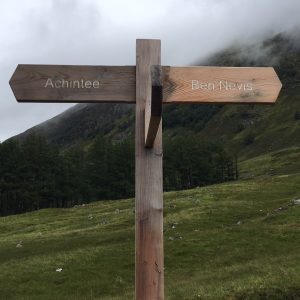 It’s always difficult deciding how many layers to wear when walking. We’d opted for numerous layers and as it was drizzly when we left Brevins Guest House we’d also donned our waterproof trousers. However, the many layers I had were way too many. Within the first 20 minutes I’d requested 3 ‘faffing’ breaks to de-layer. Patrick was obviously more appropriately attired from the off, as he only removed his waterproof trousers. On our 3rd ‘faffing’ break we got into conversation with the Stredwick family from Devon – mum, dad and 3 sons. They saw our branding (thanks Jo Payne) and assumed we were doing the 3 Peaks. We explained the cycling bit and gave them our business card. The youngest son Tom was bagging his first munro with the climb up Ben. He was going up our route with mum, whilst dad and his 2 older brothers were going via the arete (rather more challenging!). We wished each other well and continued.

It was a long slog and we didn’t have a view to entertain us as we were walking in cloud. All a bit of a trudge. The 2nd half of the route has a series of zig zags. There were 9 on the map and so I counted them as we ascended, in order that I felt we were making progress. My counting went a bit awry, as I’d got to 9 but we hadn’t reached the next part of the route. Somehow I’d added 2 on earlier. All rather demotivating. Our shoulders were getting tired from using poles to provide relief for our legs.

We eventually reached the boulder strewn summit and joined the short queue to get our photo taken. Kate, a young woman from New Jersey obliged. She didn’t seem over enamoured with her home state, I commented that Springsteen came from there and that was good enough for me. 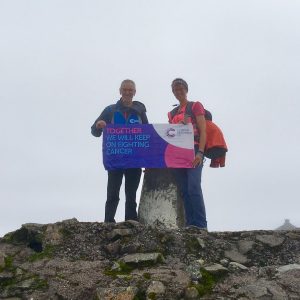 We’d been walking at a steady pace, conscious of the fact we needed to cycle 80 miles tomorrow and it had taken us 3 hours 15 mins for the Visitor’s Centre to the summit. We stopped here for a break and feasted on sandwiches bought in Tesco yesterday afternoon, chunks of a malt loaf (I didn’t realise not all malt loaves were semi-sliced and had bought the other version), the crumbs of some Welsh cakes which had disintegrated en-route and a Snickers bar. 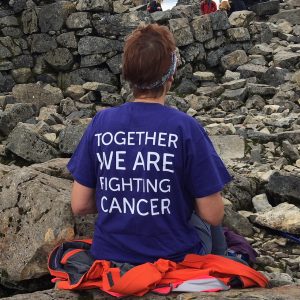 Amazingly the top was cloud-free. we were in a zone with clouds above us and clouds below us.

Now for the descent – it’s not the cardiovascular workout that the ascent is, but it does gives your knees quite a hammering (even with poles). We had our heads firmly down, watching  where we were placing our feet, when we heard a voice say “hello”. It was Tom and his mum. They were meeting the rest of the family on the summit in 20 mins. We congratulated Tom for climbing his first munro and they wished us well for the rest of our challenge and on we went.

After another 10 mins we came across a group of women sporting very cheery yellow t-shirts with branding for the Beatson Cancer Charity. We explained we were visiting the Beatson Institute on Tuesday and why, and one of them advised that she worked there. Quite a coincidence. They were raising money for the charity and had already raised more than £1500. Good luck to you for your very worthy cause, it was good to meet you. 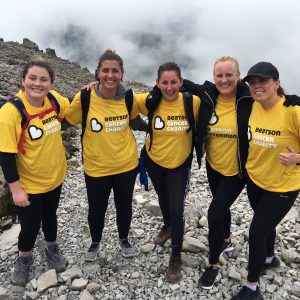 As we descended further we passed 2 other notable people heading upwards – one was a woman with a prosthetic leg and the other a blind man with a guide. Both of them had an impact in terms of making us realise that our walk up Ben was not really that significant. 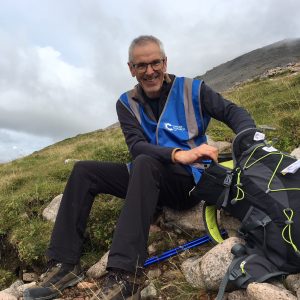 We had a couple of breaks for additional delves into our ‘feast bags’. Note Patrick is still smiling! The last 45 minutes was tough. Our legs turned to jelly and we didn’t really have full control over them, our knees continued to be uncomfortable and Patrick’s feet ached. However, we pushed on and 2 hours 45 minutes later we were back at the Visitor’s Centre. Click on the link below to see a video with 30 seconds from Sue on how she felt at this point.

Sue’s thoughts at the bottom of Ben

So, both of us are feeling tired, but also positive having completed the first part of the madness that is 3 peaks Ultra 4 CRUK!

With 80 miles to cycle tomorrow we need to be off to an early start so got back and sorted out Rubes and Roberto (our trusty steeds), did a bit of sorting out along with some stretches, had showers and within an hour headed out to meet Terry and Diane who will be providing support through to Carlisle. 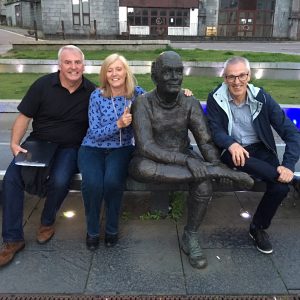 It was lovely to meet both of them and see their huge commitment to our challenge and Cancer Research UK. We’re so grateful that they stepped in at the last minute to support us and we can’t thank them enough. We had a good catch up over dinner and did a briefing on the following day. Terry, I was delighted you came with folder and pen, but I’d expect nothing less.

The first day is complete. It’s 11.30 pm and we’re both knackered! Goodnight.

Do weather statistics get any more depressing than this data for Ben Nevis?

It’s covered with cloud 355 days of the year, battered by 261 gales, covered in snow for 6 to 7 months a year and finally – drenched in 4.35 metres of rain per year, compared with only 2.05 metres in Fort William. (The rainfall on Ben Nevis is 17 times the average London rainfall)!