Home » Blog » Make the most of it whilst you can

Make the most of it whilst you can 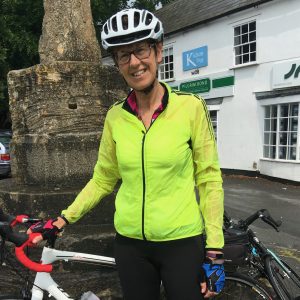 The weather has been generally kind this week, but there was an occasion when we’d reached the top of the Ridgeway that the heavens opened and our thin jackets stuck to the bare flesh on our arms underneath. As we pedalled furiously on the gentle downward slope of the escarpment, getting absolutely drenched, I felt quite liberated. A feeling I can’t exactly describe, but it was a good one. On reaching Lambourn I suggested to Patrick that cycling downhill in the rain was liberating. He described it in another way, which in order not to offend sensitivities, I will not quote verbatim here. Needless to say, he didn’t agree with me!

Whilst cycling through the Berkshire countryside we stopped in the village of Leckhamsted. There was a bespectacled little boy, age approx 9, who was riding his bike. As we approached he pedalled faster, showing off his speedy cycling skills and then came to an abrupt stop and shouted over to us “Make the most of it whilst you can!” It amused us – a 9 year old sounding wiser than his years. His comment means a lot more to us than ‘crack on whilst the weather’s good’. We advised him we were and he said he was too, then decided to shin up a tree to demonstrate he had tree climbing as well as cycling skills. As we said goodbye and pedalled off, he shouted “Enjoy the rest of your day!”  An amusing interlude

And now onto disgusted…

We’d almost completed our ride and were pedalling through the village of Westcot, when we were forced to brake sharply as a car pulled out of its drive without looking to see what else was on the road. The car stopped and we overtook it. However, 50 yards down the road I decided I’d speak to the driver, so barred their way by standing with my bike in the middle of the road. As the driver pulled their window down in anticipation of my ‘advice’, I noticed that she was attempting to shield a flowery mug containing a hot beverage, which she was holding in her left hand. I’d planned to give her some advice on being more cautious as she pulled out of her drive in future, but deemed it more appropriate to advise her that driving whilst holding a mug containing a hot beverage was illegal. If anyone knows a middle aged woman, with a dark blue car (smallish eg polo or similar) who lives in Westcot in one of the houses at the Sparsholt end of the village, you can advise her that she’s got her 2 minutes of fame and featured in this blog.