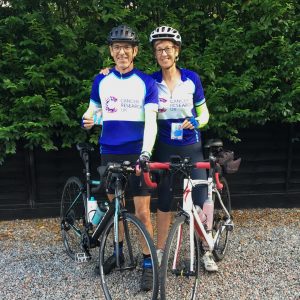 Vince, the owner and front of house man at Brevins Guest House had kindly agreed to provide us with breakfast earlier than the standard time of 7.30am so we could get on the road. When we appeared downstairs he gave us a smile and a look which suggested he thought we were just a little bit crazy. When we said goodbye to him, he warned us to be careful and to watch out for the logging lorries on the A82. He’d mentioned the logging lorries on a couple of previous occasions. The A82 was a bit of a concern to us. It’s the major road from Fort William to Glasgow. If you’re wondering why we didn’t plan to use an alternative quieter road – there isn’t one! Have a look on a map – there’s a lot of nothingness in that part of Scotland.

After many months of preparation and training we were both keen to get on our bikes and start the cycling part of our challenge. As always an emotional time when we think about why we’re doing this.

We’d broken our 80 mile cycle ride down into 3 chunks: 20 miles to Glencoe village, 30 miles to Tyndrum and the final 30 miles to Luss on Loch Lomond. The 3 chunks helped us cope with it psychologically , but also they’re the places we’d agreed to meet Terry and Diane who would provide sustenance and if possible a black Americano for Patrick and a skinny, decaf cappuccino for Sue.

So, off we pedalled along the side of Loch Linnhe. This part of the day was beautiful – the early morning sunlight glinted on the hulls of the small boats moored in the loch and small white, fluffy, cumulus clouds were below the summit of the hills on the far shore. This first 20 miles were relatively flat, we made good progress and felt really good. 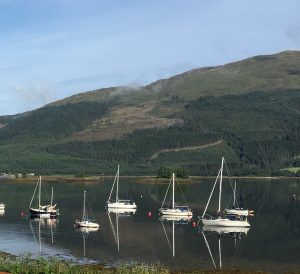 We arrived at the village of Glencoe to be cheered in by Terry and Diane who provided us with coffee from the local cafe. We discussed how stunningly beautiful the drive/cycle had been and gave an estimate for when we’d arrive at Tyndrum. 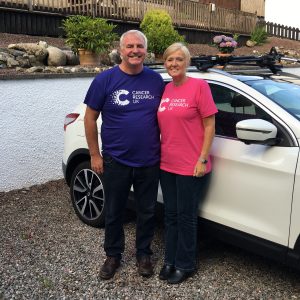 It was the next part of the journey where the hills were. We had a steady climb to get up to the Glencoe Pass. it was just less than 3 ‘Ridgeways’ high. A Ridgeway is 400ft. This is defined from the elevation change from our house to the top of the Ridgeway. Whilst there was a significant climb it was over quite a distance, so it was a case of getting into a gear so you could just keep going. As we travelled through Glencoe on Friday in the rain we felt it was grey, miserable and bleak. Today in the sunshine it was beautiful, dramatic and inspiring. There were times when there was no traffic, a stillness descended and moments of almost awe and wonder at the beauty of nature. It felt good to be cycling through it, even if it was uphill! Then there were busier times and at one stage four logging lorries in convoy overtook us. You were right Vince! 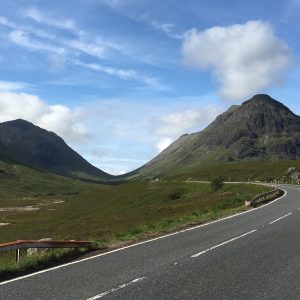 We cycled past waterfalls and through a landscape where boulder strewn rivers and small lakes added interest to our journey. 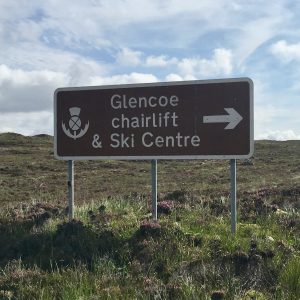 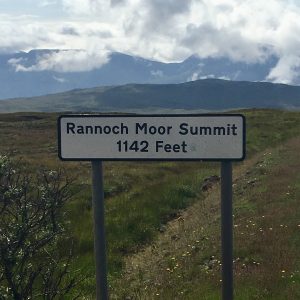 It felt really good to see the sign for Rannoch Moor Summit, as this is the highest point on our 3 Peaks Ultra 4 CRUK challenge.

We arrived at Tyndrum and still felt good. 50 miles done and less than 30 miles to go. We’d done the hard work and most of this last section was generally downhill or flat.

With 15 miles to go we had a short banana break at the side of Loch Lomond. We should have felt refreshed, but as we pedalled off our legs were beginning to tire. When we joined the junction with the A83 7 miles further on, we had another quick break. The road was now busier than ever and we were flagging. We tried to resist continually watching the ‘miles to destination’ figure on Gerry the Garmin (bicycle satnav), but did look at it rather more frequently than was helpful from a psychological perspective. It was a long, arduous 7 miles to our home for the night on Loch Lomond. Thighs and rear ends were feeling particularly abused. 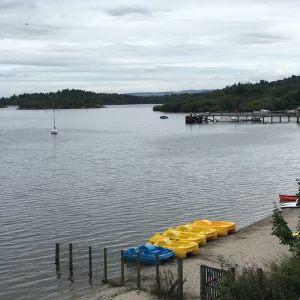 However, overall it had been a good day. We reached our destination to get most of our tasks completed before dinner (sorting out bikes, washing kit, social media and the blog). This means we have the opportunity to get a good night’s sleep before the day we have been in fear of – 93 miles from Luss to Moffat, through Glasgow.

Loch Lomond  is the largest expanse of fresh water in Britain at 27.5 Square Miles.