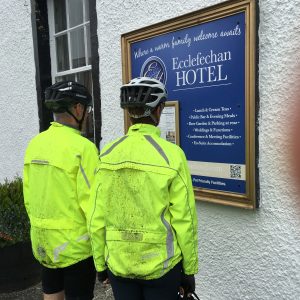 Patrick- beginning of the day

It was raining when we left Moffat and so wore our warmer, waterproof jackets.We’d pedalled a couple of miles when we approached a queue of traffic on the B road we were travelling on. One of Vince’s logging lorries had shed it’s load a couple of minutes earlier and it was now blocking both sides of the road. What was needed were a few champion caber tossers, but unfortunately there weren’t any around, so the clearing up was slow. We carried Rubes and Roberto and managed to pick a route through the huge timbers. A benefit of cycling vs driving!

We continued on the B road which followed the M74.  The route was easy for Gerry the Garmin (cycling satnav) but rather monotonous for us. For much of the route the B7076 was screened from the M74 by mature deciduous trees and bushes, which also acted as a barrier for the traffic noise. However, there was nothing to look at. The view for the first 22 miles of our journey generally looked the same and that’s not a good thing,

Then we arrived in Ecclefechan where we’d agreed to meet Terry and Diane. We’d decided on this town as a rendezvous point because there was no other place of any significance between Moffat and Carlisle and secondly it’s a jolly amusing place name! 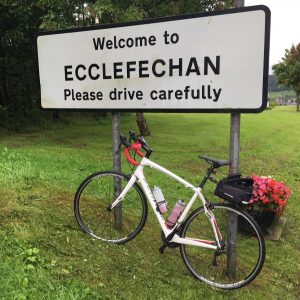 Whilst we were in Ecclefechan, Terry (a practical man with a boat and strong thumbs) made an adjustment to Rubes before we drank coffee and ate warm scones in the Ecclefechan hotel – a place with a warm welcome and swirly carpets. Clink on the link  below to hear Patrick’s thoughts on progress to date

We stayed in Ecclefechan (how many times can I get this name into this blog??) for rather longer than we should have done. It was more enjoyable chatting to Terry and Diane than getting on our bikes in the rain and heading southwards, but after more than 45 minutes we eventually made a move.

The road continued in its previous boring way, but at least we were making steady progress. The only place we passed through  between Ecclefechan (its that name again!) and Carlisle was Gretna Green -and that doesn’t appear to have anything going for it. 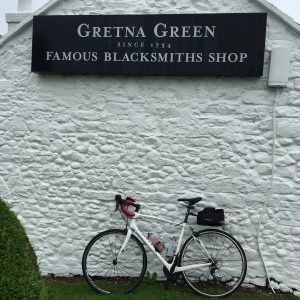 Reaching England was a milestone.Different country, but the same weather – rain. By now I’d discovered that my ‘waterproof’ jacket was no longer waterproof. 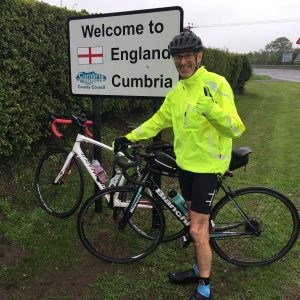 Some miles north of Carlisle Gerry the Garmin  tried to take us down a lane which which was signposted to a large refuse site. We could see the lane continued beyond the tip, but it didn’t look like a great road surface so  having reviewed our secondary and tertiary navigation systems (relevant pages ripped out of the 2018 Big Road Atlas and Google maps)we decided to stick with the boring road.

Today was Terry and Diane’s final day of providing support on our challenge and our chum Jackie was taking over. The plan was that we’d all meet in Carlisle railway station at 2pm – Terry and Diane driving the support vehicle, us on Rubes and Roberto and Jackie on the train (2 changes required from her home station). The chance of this working effectively was low. We’d been terrible on the last couple of days at estimating our cycling times for Terry and Diane and who would ever trust a  train company in the UK to be punctual, particularly where 2 changes are required. However we arrived at 13.55pm to be greeted by Terry and Diane and at 14.05 we spotted a CRUK branded Jackie heading towards us. 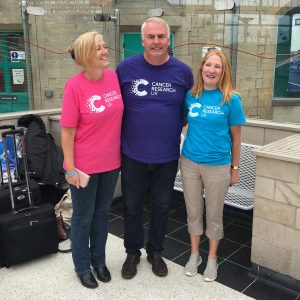 Terry and Diane had been fantastic support over the last few days and we couldn’t thank them enough. They caught their train to head back home to Glasgow, Jackie took over the support vehicle and we pedalled out of a rainy Carlisle towards Cockermouth. 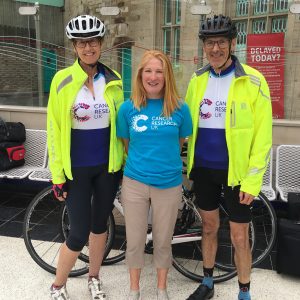 There is only one obvious road from Carlisle to Cockermouth – the A595. We travelled some distance down this road and I shouted to Patrick that I needed to stop. I’d got spooked by the volume and speed of traffic on this road and wanted to look at alternatives. Patrick advised that he felt similarly unhappy. Out came secondary and tertiary navigation systems again. A few miles up the road was the opportunity to join the A596 – it would take us slightly further north, but we were prepared to do extra miles if there was less traffic. However, when we approached the roundabout where we needed to decide which road to take we decided to do an audit to see which road was the busiest. Patrick counted the vehicles going off down the A596 and I counted the ones staying on the A595. In the period we were counting his number was 25% higher than mine, so we decided to stick with it. From here onwards it was much, much better and we didn’t feel that level of risk we’d experienced earlier.

Having had the monotony of the B road for the first part of the day, we now had the monotony of this road. We were generally climbing, but in an undulating sort of way, so the progress in terms of elevation gain was slow. Then at 60 miles we hit a long hill which seemed to go on for ever. It climbed towards a wind farm at the top. We’d past numerous wind farms over the last few days. They’re sited in those locations for a reason!  And that reason never seems to be assisting us. Today’s westerly wind impeded our progress down to Cockermouth. It was a tiring journey and we were struggling to remain positive. Click on the link below to hear Sue on this part of the journey.

Today was hard work. We’d underestimated the demands of the day and therefore psychologically that had a negative impact. However, we’ve been spurred on by our donations reaching more than £3k. Thank you to all who have supported us. If you wish to sponsor, please go the Home page of this web-site where there’s a link to our Justgiving page

Cockermouth – is “the mouth of the River Cocker” not whatever it was you were thinking. It was the first town in Britain to have piloted electric lighting in 1881.
Bookmark the permalink.