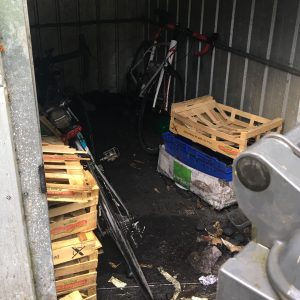 We had a lot to do this morning to sort out the now dry, but previously wet cycling clothes and kit, hiking clothes and kit, washing that we’d done the previous night along with standard cleaning and preparing the bikes for another day on the road. Our chains had developed rust overnight so that needed dealing with and we liberally sprayed PTFE water repellant on appropriate bits. We did wonder whether we should also spray ourselves. We did procrastinate for a period of time hoping for an improvement in the weather. 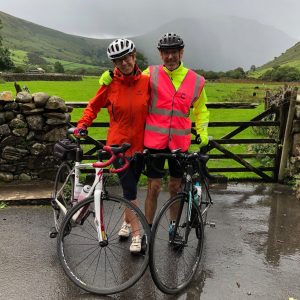 Within minutes the rain came lashing down again! 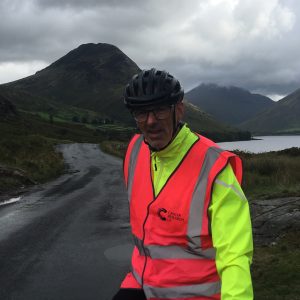 Despite having very heavy showers we also had. some bright intervals and dramatic views to lift our spirits. 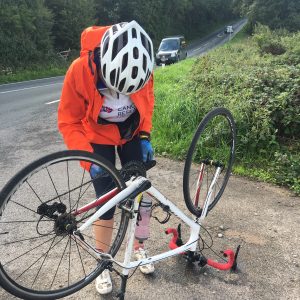 A key feature of today were the many hills with 90% of them appearing to go up! On one occasion I failed to get into the right gear quickly enough, my chain came off and I was pedalling furiously and getting nowhere. Our highly technical piece of kit – a lollipop stick helped get it sorted.

At the top of our first major hill, we were rewarded with views of the sea and celebrated with a banana, a seed bar and some blackberries from a nearby bush. 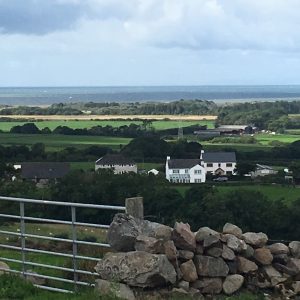 Progress hadn’t been quick, but we eventually arrived at the Greyhound Inn at Grizebeck. Jackie hadn’t known what facilities there would be in this village and so had purchased a feast from a village bakery en-route. Jade, who served us with 2 mint teas and a black americano, was kind enough to let us eat our bakery goods here. 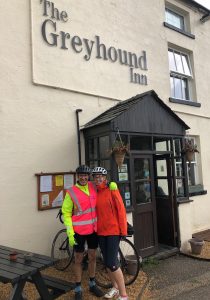 Having seen the huge hill we had to climb to begin our post-lunch session, once again we procrastinated. However, off we set and refuelled and re-energised we attacked the hill and felt upbeat and positive at the top. 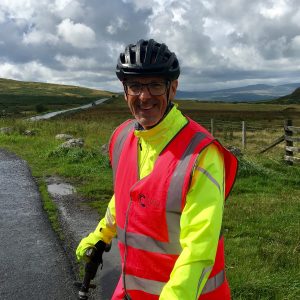 Unfortunately, the good weather didn’t continue for too long and for the rest of the day we kept pedalling into blustery showers, with some temporary relief and sunshine. During lunch Jackie had remarked that she hadn’t seen any rainbows , despite the mix of sun and rain. Our response was “There are no rainbows on this challenge!”

The dilemma we now faced was the traffic was building on the busy A road, as it was Friday afternoon and routes from main tourist centres such as Windermere now joined our road. To stay safe we decided to head onto unclassified roads.The problem was this took us back into the fells and many more hills. In addition navigation was difficult because the  tangled knots of these minor roads were not easy to identify on page 66 of The Big Road Atlas and a lot of the time there was no internet access to use Google maps.

Progress was ridiculously slow, we got lost 3 times and had to double back, increasing the mileage and the hills. It was time of frustration! Some hours later, much later than anticipated we arrived for our final stop and rendezvous with Jackie at the Heversham Hotel, with 18 miles left to reach Lancaster. As we had refreshments, we got into conversation with a couple who asked what we were doing – Tony and Gwen. They pro-actively told us proudly “We are cancer survivors”. They kindly gave a donation and Gwen said that it was because of research that she got the treatment which cured her. They also commented on how important they believe early diagnosis is. We wholeheartedly supported this.

For some reason the last 18 miles seemed less daunting than usual and we reached Lancaster in good time despite it being the end of a very long day. Our tally for the day was 81 miles and with 6200 feet of ascent ( for the non-cyclists amongst you, that’s a lot of hills!). Our original route was only 65 miles. Overall it’s been a good day and looking forward to the holiday weekend – a couple of cycle rides and a walk up a hill are on our agenda.

When we met Jackie she had actually seen a rainbow! 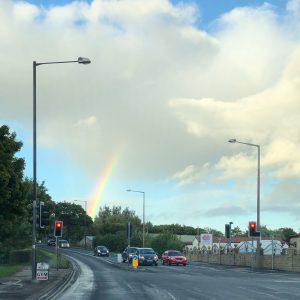 On top of that the forecast for tomorrow looks fantastic!

Lancaster- the Lancaster canal has the longest lock-free stretch of built waterway in the country at 41 miles.

Home of the longest continual Quaker meeting site in the world dating from 1677.