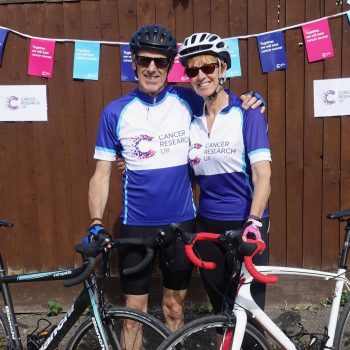 Patrick and Sue are climbing Britain’s 3 highest mountains and cycling 500 miles to fundraise and increase awareness of Cancer Research UK’s bold ambition of 3 in 4 patients surviving cancer by 2034.  We want to Beat Cancer Sooner

Having both been widowed at the age of 52, due to our spouses dying fro​m​ cancer, we recognise the importance of CRUK’s work and want to save other families from having to go through this devastating experience.

Since the deaths of Pam and Philip in 2007 and 2009, we became more and more involved with CRUK. In addition to fundraising, we became Cancer Campaigns Ambassadors in Sheffield and Wantage respectively, campaigning to improve early diagnosis of cancer and get legislation introduced for Standard Packs for cigarettes.We met increasingly at training and lobbying events and to cut a short​ story even ​short​er​, becoming much more than volunteer colleagues, we married in December 2016.​

​We ​have done many fundraising activities over the last few years. Sue’s most recent fundraising challenges include climbing Kilimanjaro and cycling from Lands End to John O’Groats. Patrick has primarily focused on running events, including the London marathon in 2014. His favoured running event is the half marathon and he will have completed another ​5​ this year, when he finishes the ​Amsterdam​ event in October . Having had a 45 year sabbatical from cycling(!), Patrick bought a bike in January ​2017​ to be able to join Sue to successfully complete​ the 101 CRUK Shop Cycle​ last August. Either he’s mad, in love, or both of the above! To share some of the highlights and lowlights of last year’s challenge, read some of the blog posts…

We are both passionate about supporting CRUK and determined to play whatever role we can to Beat Cancer Sooner and reduce the number of families whose lives are devastated by cancer.